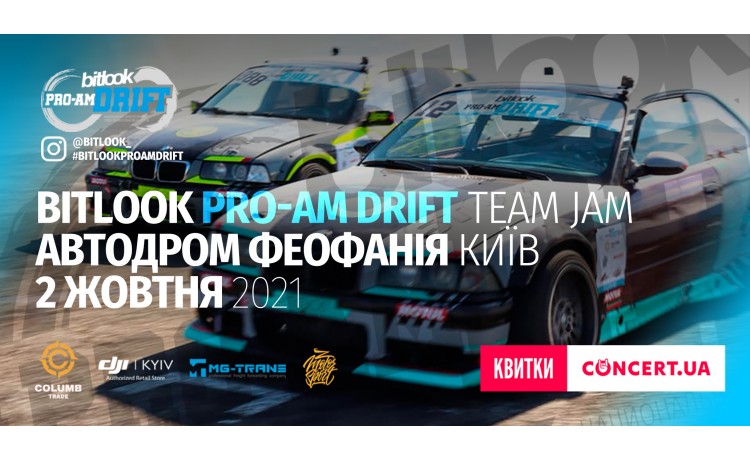 Team drift for the first time in Ukraine!

On October, 2 in Kiev at the Feofaniya autodrom will be an exclusive team boost for drifting Bitlook Pro-Am Drift: Team Jam!

Bitlook Pro-Am Drift: Team Jam - these are fantastic and spectacular competitions among teams. Inspired by a unique drifting tradition, the three cars will try to drive together as close as possible to each other, demonstrate high speed and create a lot of smoke together, in a team, and not against each other, as in normal drifting competitions.

Bitlook noticed a new phenomenon in Europe and the United States, where entire teams take part in competitions. Each team consists of three cars that simultaneously overcome the track, as in a traditional drift race. Judges rate races on a scale of 0 to 10 points, relying on the same criteria as in traditional drift, namely the trajectory, skid angle, style and distance between cars.

Also, we have prepared solo contests in which one representative of each team will take part. For each contest, including team, triple, drift, points are added, the amount of which will be added to the team standings of the Bitlook Pro-Am Drift season.

Currently, Urban Motors from Kyiv is leading in the team standings. They are followed by the guys from The Riders in second place. The third line is occupied by the Prograce team. Each of these teams can become the 2021 Champion, but for this you need to properly present in the team competition Bitlook Pro-Am Drift: Team Jam. So the intrigue is too high - who will show the best team drift?

Перший соло-контест - Furidashi Battle - competition for the best initiation of skidding (staging). This is the element from which the drift begins.

Другий соло-контест - Drift Parking - exit to parallel parking from the controlled skid in a conditional garage.

The third solo contest - Wall Ride - long travel of cars along the wall, or on the outside of the turn.

Triple drift - Super3 - will be the culmination of the competition!

The all-Ukrainian series of drifting competitions consists of 4 traditional rounds in Kyiv, Lviv and Odesa and one team competition in the capital. In each round, participants gain points, the amount of which will determine the winner of the year!

Tickets for the competition are already on sale at concert.ua

These are official sports competitions under the auspices of the Automobile Federation of Ukraine, which are included in the calendar plan of the Ministry of Youth and Sports of Ukraine!

You want to taste the adrenaline?

We are waiting for you on October 2 in Kiev at the autopod Feofania! Start at 12:00

More information on the site bitlook.net and in Instagram @bitlook_